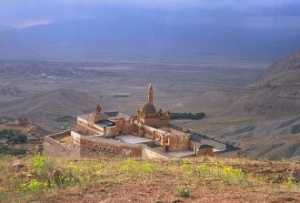 
Turkey is a popular tourist destination, and of its many places of interest, you should not forget to make a jaunt to Agri, located at Eastern Anatolia and extending to the Iranian border. Agri city is a regional capital and takes its name from the Agri Mountain. Situated on a 1,650-meter high plateau, Agri has a multicultural history, of being ruled by the Assyrians, the Persians and the Greeks.

The thrill of being, of exploring and of feeling a striking place like Agri cannot be explained but can only be experienced.
Agri  |  Mount Ararat, Agri  |  Dogubayazit, Agri  |  Other Attractions in Agri  |  Dining in Agri  |  Agri Hotels and Accommodation  |  Transportation to and around Agri