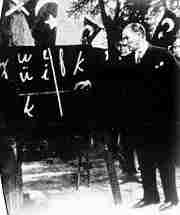 
Mustafa Kemal Ataturk is universally acknowledged as the founding father of the modern state of Turkey. He was also his country's first President. He was a visionary statesman and a military leader par excellence. His surname, Ataturk, means the ancestor of Turks. This name was given to him by the first Turkish parliement for his accomplishments and for his invaluable contributions to the birth and modernization of the Turkish Republic.
Ataturk  |  Early Years of Ataturk  |  Military Career of Ataturk  |  Ataturk and the Turkish War of Independence  |  Reforms of Ataturk