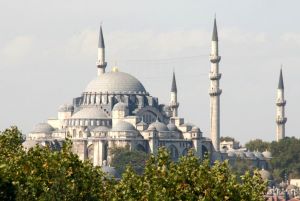 
Any tour of Turkey is incomplete without a visit to the Blue Mosque in Istanbul. The Mosque is a marvelous piece of architecture that is sure to leave you spellbound by its splendor and sheer elegance.

It is natural to be expecting a blue colored building when you go to visit the Mosque, but the mosque has an exterior of plain grey. The name Blue Mosque actually comes from the blue tiles used inside the Mosque. The Mosque is surrounded by a broad courtyard on three sides entered on each side by eight portals. The inner courtyard is paved in marble. Rivaks, supported on columns made of marble, granite and porphyry surround the courtyard. In the center of the courtyard is a fountain for ablution, surrounded by six marble columns. This is the only Mosque in Istanbul which has six minarets. Each of these minarets supports two to three balconies each.

Walking further, you reach the main dome, which has a gold spire. The central dome rests on four pointed arches. There are four semi- domes on four sides of the main dome and small cupolas in the corners.

As you enter, you will see that large parts of the walls are covered with faience, most of them having floral and rumi motifs. In total 21043 tiles have been used in this fine art of tiling and it is from this that the mosque gets its name of Blue Mosque. There are many fine bronze and wooden artifacts inside the Mosque which are a treat to see. On either side of the left gallery is the penitentiary of Sultan Ahmed I.
Blue Mosque  |  History  |  Visiting Blue Mosque  |  Around Blue Mosque  |  Blue Mosque - Overview