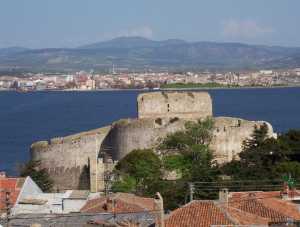 View of Canakkale from Kilitbahir


Canakkale, in the Canakkale province of Turkey is an important town and seaport of the country and is a significant center of tourism. Canakkale province is the second one in Turkey (the foremost being Istanbul), which has territory in both the countries of Asia (Biga Peninsula) and Europe (Gelibolu or Gallipoli peninsula). It lies on the southern coast of Dardanelles Strait (or Hellespont) that connects the Aegean and Marmara Seas.

During your stay in Canakkale you can make it the base and can explore the two most important places of world history - Troy and Gallipoli. Originally, Canakkale was an Ottoman fortress named Kale-i-Sultanie. Later, it excelled in pottery and thus earned the current name Canakkale - "canak" meaning pot and "kale" meaning fortress. If you are planning to visit Canakkale then it's better to avoid Anzac Day of April 25th (the day of paying tribute to the soldiers of World War I) because most of the city hotels remain crowded at that time.
Canakkale (Dardanelles)  |  History of Canakkale  |  Main Attractions in Canakkale  |  Hotels, Restaurants and Transportation