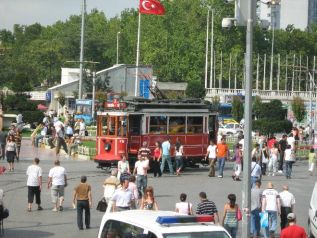 
Crime in Turkey is relatively low but as in other Metropolitan areas, pickpockets are a common problem on buses, in markets and in other crowded places, so always keep an eye on your valuables.

There are also a couple of known scams operating in the bigger cities, Istanbul especially. These both target single men.

In the first, the single man is alone when another man strikes up conversation. You get on well, he tells you he is meeting friends in a bar and asks you to join him. You accept, follow him to the bar, are no doubt met by girls on your arrival and they join you for drinks. Everything seems fine until the moment that you are presented with a very costly bill and are told that you must pay for the girl’s extortionate tipples. By this point, there is no use arguing. The bar or nightclub is in on the scam. If you complain, you will simply be frog-marched to the nearest ATM and forced to hand over the cash. If you refuse, things will get violent. If this happens to you, it is important to report it – some tourists have gained their money back by returning to the scene of the crime with the police. To avoid it altogether, single men should avoid such invites: if you do want to accept, however, suggest a completely different bar. If they are not willing to agree to this, there is something wrong.

The second scam also involves single men. In this situation, the man is approached by two or three men while traveling. Your new traveling companions will be friendly and jovial; they will even offer to buy you a drink. Take it at your own risk, however. While drugging isn’t a common problem, you may just wake up hours later after having your drink spiked to find your new friends have made off with your money, passport and belongings and you have no idea where you are.

Other safety precautions in Turkey:
It sounds obvious but make sure you walk around with your eyes open. Safety is not a priority in Turkey. If you look carefully, you’ll see holes or lumps in pavements that have not been fixed, while dangerous drops will have little if any warning. Do not expect the same level of health and safety as you would at home.