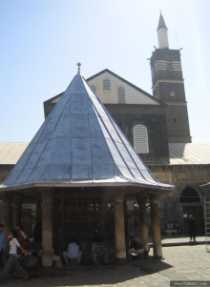 Diyarbakir is full of history


Encircled by the 5.5 kilometer black Basalt wall, the city of Diyarbakir in the Southeastern part of Turkey still oozes medieval charm. River Tigris (Dicle) borders this city whose population (including suburbs) crosses one and half million.

Diyarbakir is the capital city of the Diyarbakir province. Here you will find the juxtaposition of the old-fashioned tenement blocks of the earlier days with the modern apartment blocks of the expanding suburb. This dramatic city is nick named as the "Paris of the East" and is mostly inhabited by the Kurds. This region is known for its excellence in production of jewellery and the specialties include mat bracelets, coriander necklaces and silver ornamented shoes.
Diyarbakir  |  History of Diyarbakir  |  Main Attractions in Diyarbakir  |  Diyarbakir Hotels and Accommodation