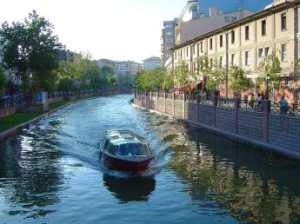 
Eskisehir, a large industrialized city in west-central Anatolia, is one of the oldest settlements (3500 BC) in the Anatolia region. Its foundation on the bank of river Porsuk by the Phrygians dates back to the 1st millennium BC. The historical city holds out Phrygian relics and sculptures through its museums. The most famous museum in Eskisehir is the Ottoman House museum, which is the storehouse of 19th century domestic architecture of Turkey's local ethnographical items.
Eskisehir  |  Main Attractions in Eskisehir  |  Transportation to and around Eskisehir  |  Eskisehir Hotels and Accommodation  |  Eskisehir Restaurants