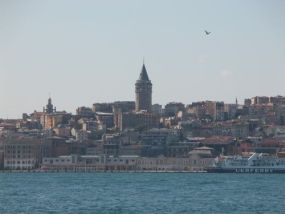 Galata Tower, in Istanbul, has a rich history


Visitors to Istanbul cannot miss the Galata Tower. A huge cone-capped landmark on the European side of the Golden Horn, it dominates the skyline of Galata and is the first sight to hit you in the city.

Located in the north of the Golden Horn, the Galata Tower was originally constructed by Emperor Justinian in 528 AD. It was destroyed during the Fourth Crusade, but when the Geonese conquered the place in the medieval period, the tower was again built as part of their fortification of the region. They wanted to build a wall to fortify the area and the tower was built in the center as a watchtower as it was a vantage point to look out to old Istanbul on the opposite side. At that time, the Galata tower was known as "Jesus Tower", with a spire and a cross on top.

Istanbul was later conquered by the Turkish ruler Sultan Mehmet. He caused no harm to any of the religious buildings in Istanbul or to the Galata Tower. In fact, it was rebuilt time and again by the Ottomans after damages caused to it by fires and earthquakes. During the course of reconstruction, the Ottomans incorporated their own architectural design into it. The Galata Tower is therefore a true reflection of symbiosis of cultures so typical of Galata.

The huge cone-capped cylindrical tower is magnificent in its dimensions. It measures 8.95 meters in diameter and stands 140 meters above sea-level. From ground level, it is 61 meters. This altitude makes it a good vantage point to see the whole of Istanbul. The walls are 3.75 meters thick. Not much remains of the original appearance though, due to destruction by fire and earthquakes. However, an interesting feature you will observe is that the first three floors have a Genoese style of construction while the upper floors have Turkish architecture. Around the topmost row of windows is a narrow panorama balcony. Although open to weather, it offers a spectacular view of the city of Istanbul.
Galata Tower  |  History  |  Interesting Facts  |  Visiting  |  Galata Tower - Overview