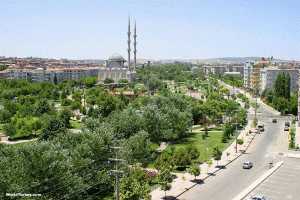 Aerial view of the city of Gaziantep


One of the oldest provinces of Turkey is Gaziantep and its capital is Gaziantep city. The city was known to the Greeks as Antochia ad Taurum, which literally translates to "Antochia in the Taurus Mountains" according to scholars. Situated at an easy distance of the Mediterranean and Syria the city lies near the Sacirsuyu River at a height of 1070 meters above sea level. One of the most developed places of South Eastern Anatolian region, Gaziantep would be the right mix of modernity and the ancient for your vacation.

Gaziantep is well connected by road, which hails back to almost the Middle Ages; this is because Gaziantep is an important juncture on the Silk Road. Moreover, it is situated at the point where the road and rail transportation connects the south and the Mediterranean to the east and the north. Gaziantep has its very own airport, The Gaziantep Oguzeli Airport that is located at a distance of 20 kilometers from the city center. Turkish Airlines has regular flights to this province.
Gaziantep  |  History of Gaziantep  |  Main Attractions in Gaziantep  |  Gaziantep Hotels  |  Gaziantep Food  |  Shopping in Gaziantep