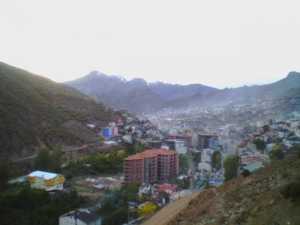 
Gumushane, lying on the main route from Trabzon to Iran is one of Turkey's most important cities in the Eastern Black Sea region. It is the capital of the Gumushane province. The city lies along the Harsit river at an altitude of 1210 meters above sea level, i.e., on a high plateau shaped by deep valleys and high mountains; and enjoys a moderate climate. The highest hill of the city is Abdal Musa hill, touching 3331 meters.

Gumushane province is a province of diversity. The bare rocky landscape of the south is in startling contrast to the lush green forests of the north, and even the color of the soil changes in different parts of the province. This geographical contrast is matched by cultural contrasts, with communities of Greeks, Armenians and Turks coexisting peacefully here over the centuries.
Gumushane  |  History of Gumushane  |  Gumushane Hotels and Transportation  |  Activities and Attractions in Gumushane