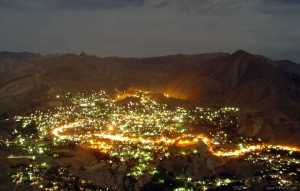 Hakkari, a small south eastern city, is surrounded with mountains


Hakkari is a province situated in the Eastern Anatolia region of Turkey, located at the juncture of Iraq and Iran. Its adjacent provinces are Sirnak to the west and Van to the north. Mounts Cilo and Sat are the two towering ranges that dominate the topography, the slopes of which are favored for mountaineering and winter sports. The snow accumulating on the upper parts of these mountains form beautiful glaciers and the wide valleys between the mountains are flamboyantly colorful.

The population of Hakkari is mainly Kurdish. Winters are cold and harsh, and summers are hot and dry. Because of the extreme geographic conditions of its region, agriculture as a means of livelihood is limited, and livestock raising is the main activity. The province is historically famous as the birthplace of the renowned 17th century Kurdish poet Ahmad Khani.

The capital city of the province is also called Hakkari. Situated at the south hillside of deep and long Zap Valley, the city is surrounded by lofty mountains, and serves as a base for mountain-climbers. It is connected by road to Van, 250 km north, and Siirt, 200 km west. The location of the city at the south east of Turkey is also of strategic importance to the country, as is the 343 km territorial band running along the on Iran - Iraq territory.

This land has been witness to a spate of tribes that have inhabited Anatolia since earliest times. In 1516, the region came under Ottoman control, but local rule remains in the hands of local Kurdish emirs. In the middle of the 19th century, the local rulers were stripped of their power, and Hakkari came under the direct control of Istanbul.