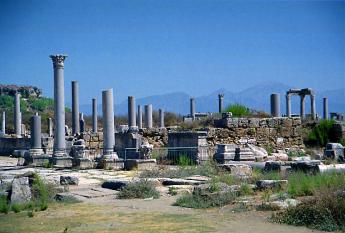 
Being in the center of the birthplace of human civilization, Turkey has plenty to offer to history lovers. Ancient Anatolian civilizations such as Hittites, Lydians and Urartus left their marks on central Anatolia, and many of their remainings can be seen in museums and ancient city excavations in and around Ankara. Ancient Greeks have flourished in Southern and Western Turkey, where you can experience a beautiful coastline surrounded with thousands of years of history. Turkey also carries the marks of Muslim Ottomans, who were in rule until less than 100 years ago. Best examples of Ottoman mosques, carvansaraies and schools can be seen in northwestern turkey, especially in Istanbul.
Aphrodisias  --  Aspendos  --  Assos  --  Catalhoyuk  --  Didim  --  Ephesus  --  Gallipoli  --  Gordion  --  Hattusas  --  Hierapolis  --  Mount Nemrut  --  Myra  --  Olympos  --  Pergamum  --  Perge  --  Safranbolu  --  Sardis  --  Side  --  Simena  --  Troy