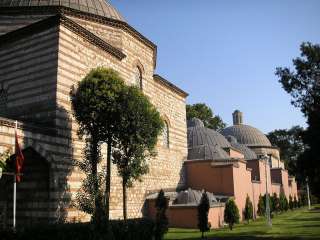 
Built by the Architect Sinan, by the order of Suleiman the Magnificent in 1556, Hagia Sophia Roxelana Hamam is offering a magical bathing experience that washes away your troubles and guarantees to make you feel like a sultan.

It's a common fact that steam rooms and steam baths have so many health benefits such as helping alleviate congestion, inflammation, reducing spasmodic breathing as well as opening the skin’s pores, releasing trapped oils and dirt, increasing blood circulation to the skin, relaxing tense facial muscles and loosening dead, dry skin. Amongst these beneficial steam experiences there´s the famous Turkish bath also known as hamam where you can both cleanse yourself and relax at the same time. It´s not only a place for health, both physical and mental, but also a tradition in Turkish culture. As a word, hamam has Arabic roots meaning "heat".

During the Ottoman Empire many hamams were built not only for bathing purposes but also as monumental structures and Hagia Sophia Roxelana Hamam (also known as Hurrem Sultan Hamam) is one of the best examples of this. The work of the famous Ottoman architect Sinan, it was built in 1556 by the order of Suleiman the Magnificent for the love of his life, Hurrem Sultan. As the wife of Sultan Suleiman, Hurrem (formerly known as Roxelana) is one of the most outstanding examples of powerful women in the Ottoman Empire. Built in the name of this powerful woman, Hurrem Sultan Hamam is located in the heart of Sultanahmet, situated just opposite the Hagia Sophia Mosque. It is the place where the baths of Zeuxippus once stood which were destroyed in 532. It functioned as a hamam until 1910 and later hosted convicts during times when the Sultanahmet Prison was full and was also used as a storage place for paper and oil. After restoration work in 1957, it was used as a carpet store until, in 2008, it went under construction for restoration once again. Now this historical place is back in business welcoming its visitors with a magical experience of the hamam tradition. It has separate sides for men and women as its structure is in the style of the classical period of Ottoman baths. When you enter the hamam an impressive blue light welcomes you along with the friendly staff. They take you to one of the traditional dressing rooms where you can undress and put on the peştemal, a printed cotton&silk body wrap. Then there's the wooden door, which opens to the hot area (called sıcaklık in Turkish) where the actual bathing experience occurs. While you're walking inside this area if you look on the ground you can see the old heating system of the hamam exhibited under glass. You can see the large, round shaped, hot marble stone (göbektaşı) in the middle and bathing basins (kurna) and private bathing cubicles (halvet) on the sides. The hot marble stone is great for relaxing while you are waiting for your body to perspire. Watching the light entering from the small windows at the top takes your mind on an historical journey. The tellak, attendant who massages and bathes the customers of hamam, then comes and starts the scrubbing and washing of your body with a silk cloth (called kese in Turkish). This gently takes all the dirt and dead skin away from your body. This process is followed by a soap massage over the hot stone. When you´re finished, and feeling like a feather, you can go back to the resting area called soğukluk in Turkish and have some soda or a delicious Turkish coffee. The Hagia Sophia Roxelana Hamam is a must-have experience if you want to feel like a real sultan for at least a couple of hours.