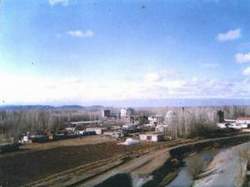 Igdir is the eastmost province of Turkey


When visiting mystical Turkey, do not miss out a sojourn in Igdir, the province that lies ensconced in Eastern Anatolia as a fertile plain between lofty highlands. With its high mountain ranges, remote plateaus, plains splashed with color, and some of the best Turkish architecture within, this region of Anatolia brings history to life.

In the northwest, at a distance of 180 kilometers extends the high plateau of Kars province, which previously comprised this district inside its borders. In the southeast lies Turkey's highest mountain, Mount Agri (Ararat). There is no better location than the Igdir plain to view the majestic scenery of the lofty mount, with its snow-clad slopes and peak. The capital of the Igdir province is Igdir city in eastern Turkey, located at around 39°55'7 N, 44°2'47 E.
Igdir  |  History of Igdir  |  Main Attractions in Igdir  |  Igdir Hotels