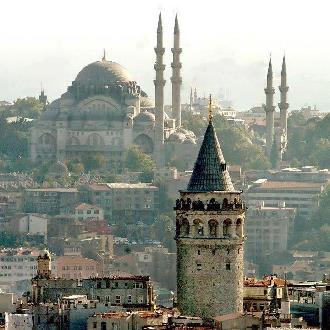 Galata Tower, with Suleymaniye Mosque in the background


A trip to Turkey is not complete without visiting its most vibrant, beautiful and exciting city, Istanbul. This historic city is the largest in Turkey and is home to more than 13 million people, making it the second most-populated city in the world. There is a whole host of things to do and see, but if you are short on time in this fascinating city, follow our selection of the top five destinations to visit - these attractions will make you fall in love with the ancient city and want to come back time and time again.

1. Shop in The Grand Bazaar

The Grand Bazaar is a must-see in Istanbul – even if you find shopping dull and boring, you will love this ancient market. The Bazaar has been trading since 1461, covers 60 streets and boasts more than 5000 shops and traders. Everything can be purchased here, from pottery and rugs to jewellery and clothing. Visitors can wonder at the architecture, winding paths, picturesque surroundings and haggle with the sellers. The Bazaar attracts up to 400,000 visitors a day – make sure you are one of them! Put some time aside for your visit to The Bazaar as you could easily spend an entire afternoon exploring.

The Basilica Cistern was built to store water for the Great Palace in the 6th century. After it was no longer fit for purpose, the Basilica lay unused and almost forgotten about – at one time it was used as a dumping ground for waste and even dead bodies. It has been restored three times and today you can enjoy looking at the beautiful marble columns that support the ceiling and wander around this underground hidden gem. One of the most popular attractions is the upside down head of Medusa; it supports one of the 336 columns in the Basilica and has caused much speculation about its origins, over the years. The Basilica Cistern is perhaps most enjoyable to visit on a hot summer’s day, as the cool air provides respite from the hot summer sun.

3. Wonder at the Topkapi Palace

The Topkapi Palace was home to the Ottoman Sultans for more than 400 years, but today it is one of Istanbul’s most popular attractions. The Palace was given the name Topkapi, meaning cannon gate, in the 19th century after having previously been known as The New Palace. You can look at the splendour that was the Sultans’ residence – the harem – and wander around the courtyards. The Palace is steeped in history and tradition, making it a popular destination for history and architecture buffs alike. The original buildings date back to 1460 and you can immerse yourself in the history of The Palace by spending a whole afternoon enjoying the beautiful surroundings.

4. Soak up the history at the Istanbul Archaeology Museums

If you love learning about a city’s history, then the Istanbul Archaeology Museums are a priority during your visit. The complex consists of three separate museums / buildings; the Archaeology Museum; the Museum of the Ancient Orient and the Tiled Kiosk. You can visit the museums after Topkapi Palace, as it is just a short walk from The Palace’s First Court. One of the must-see attractions is the sarcophagus of Alexander the Great, found in the Archaeology Museum.

5. Enjoy the views from Galata Tower

Built in 1348, the Galata Tower is one of the best places to gain a fantastic view of Istanbul. You can dine in the restaurant or café on the upper floor, or go to the balcony at the top of the tower for 360 degree views of the city. We recommend that you go just before dusk, to watch the sun set in style.

Istanbul is one of the world’s most ancient cities and has been attracting in the region of 11 million tourist visitors each year. In 2010 it was named the European Capital of Culture and it is easy to see why so many people have found it such a fascinating place to visit. Make sure that you check the weather, prior to your trip and ensure that you bring appropriate outdoor clothing and footwear – you will do an awful lot of walking while you discover this wondrous city!