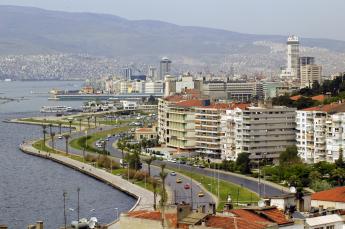 
Izmir, (Turkey's third largest city) has been for ages regarded as 'The pearl of the Aegean'. The history of Izmir dates back to 3000 B.C. and between 3000 B.C. and late 1800 B.C., Izmir was famous the world over as Smyrna. Later, in the Turkish era the city of Smyrna was re-named Izmir. The present day Izmir is the most westernized city of Turkey in terms of lifestyle of the inhabitants, their values and ideologies. No wonder, the city has come to acquire the epithet of "Occidental Izmir".
Izmir  |  Main Attractions in Izmir  |  Climate of Izmir  |  Dining in Izmir  |  Festivals in Izmir  |  Transportation in Izmir  |  Izmir Hotels and Accommodation