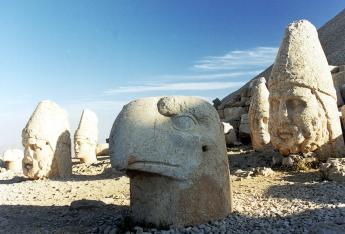 
Mount Nemrut is a 2150 m high mountain positioned in the middle of Taurus Mountains in Southeastern Turkey. It is precisely located in Commagene of the province of Adiyaman. Commagene is situated around the city of Adiyaman in southeastern Anatolia.

The Commagene region has seen many rulers. The Persians, Alexander the Great and Seleucus I Nikator ruled, until it was established as an autonomous empire by Mithradates I Kallinikos. Commagene reached its golden era during the reign of his son Antiochos I Epiphanes. This dynasty flourished until AD 72 after, which Commagene was occupied by the Romans and was regarded as a part of Syria.