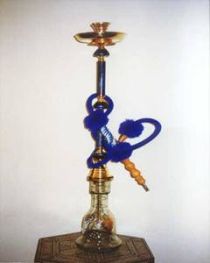 
The hubble - bubble in English, the Sheesha in Arab or the Nargile in Turkish - whatever name you call it by, the simple Hookah from India has evolved into an integral part of Turkish lifestyle and culture.

The Nargile, unlike the cigarette is smoked not to relieve tension but to enjoy good company, to think and to while away time. It will remain popular as long as people are in search of ways to relax amidst the modern day stresses.
Nargile  |  Nargile Equipment  |  Nargile Culture  |  Modern Nargile  |  Popular Nargile Spots in Turkey