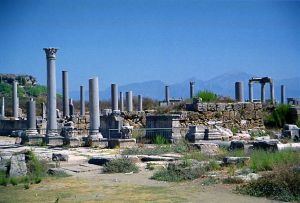 Ruins in Perge from the ancient Roman period


Originally, a Hellenistic settlement, which later developed into a thriving Roman city, Perge is a historian's delight. Situated only 18 km from Antalya in the Pamphylion plain, Perge has a long legacy (almost from 1500 B.C.) to narrate with its initial inhabitants being the Hittites. Its importance also lies in the fact that the ruins of the Roman city provides a very complete picture of the past, thus making it archaeologically invaluable. However, even if you are wondering how an archaeologically fertile site could ever interest you, you should never miss a chance of visiting it. For Perge has much to offer for the vacationer as well, it has a unique blend of the exotic and the ancient.

You may have visited many beautiful places, further Turkey itself can boast of a great number of them. But the beauty of Perge lies in its unconventionality, its mysticism and glorious past, and it beckons you to discover it.
Perge  |  History of Perge  |  Main Attractions in Perge  |  Activities in Perge  |  Perge Hotels and Accommodation  |  Getting to Perge