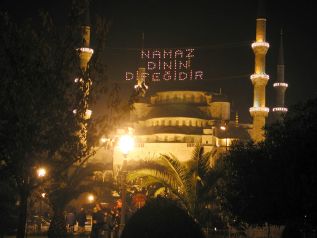 
Ramazan in Turkey (known as Ramadan elsewhere) marks the month in which the Qur’an was revealed to the prophet Mohammed and is celebrated by 30 days of fasting, considered to be one of the highest forms of Islamic worship.

In 2009, Ramazan is estimated to begin on 22 August and last until 20 September. The date is based on the Muslim lunar calendar and changes slightly each year. The start of Ramazan is based on the sighting of the new moon and other astronomical calculations; for this reason it can vary slightly from country to country. It is known as the month of charity and generosity, with Muslims encouraged to go out of their way to help others less fortunate than themselves.

Fasting is mandatory only for healthy adults – children and the sick are exempt - and is intended to increase self-control. Nothing is allowed to pass the lips of a faster from sunrise to sunset. This includes food, drink and tobacco. Observant Muslims also refrain from sexual intercourse during daylight hours.

This can be a great time to be in Turkey; foreigners are welcome and a carnival atmosphere prevails, with stalls and restaurants offering Ramazan banquets in the evenings. There can be some disruption however. Those same restaurants may now require reservations, may not sell alcohol at any time (it is polite to accede to their wishes), official businesses such as banks may close early and roads can be very busy late in the day as fasters rush home for their post-daylight food. Your sleep will almost certainly be disturbed as drummers circulate through town in the early hours – 2 or 3am - to wake up fasters ahead of Suhur, their early-morning meal.

The thinking behind Ramazan is to allow the faster to appreciate and give thanks for the pleasures in their life (by taking them away temporarily); to feel compassion and empathy towards the poor (by tasting the pain of hunger), and to bring the faster closer to Allah by spending time reading the Qur’an.