Safety for Women in Turkey 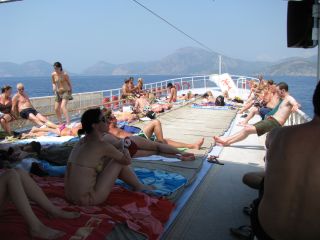 Turkey is safe for women travelers, just use common sense and basic caution


Are women safe in Turkey? Many of the resort areas in the west of Turkey are very European in nature and are perfectly safe for the lone female traveler if taking standard precautions, but women are advised to travel in groups if visiting the east of the country which is more traditional and rural.

Generally speaking, violent crime is significantly less in Turkey than in the United States or many countries in Europe, but some women – particularly those visiting the east of Turkey - report feeling intimidated or hassled. Staring can be common, as can more unpleasant advances such as pinching, groping, unwanted romantic advances and comments.

Here it is best to do things in public, ideally with mixed groups. If you are traveling alone, introduce yourself to Turkish women or families, so you are included. Make sure you dress conservatively, keep beachwear for the beach alone; while it is fine to wear shorts in the tourist resorts to the west of the country, ‘skimpy’ clothing may offend the older generation in the east.

Turkish hospitality is legendary so don´t be surprised if you are offered lifts by both men and women as they pass you by, particularly if you are in a remote area. If you are a single woman traveling alone, however, it is advisable not to get in a car with a strange man, no matter how friendly. Even if his intentions are honorable, he may think you are interested in him because you have accepted his offer. Be polite in your refusal, but if you must, be insistent.