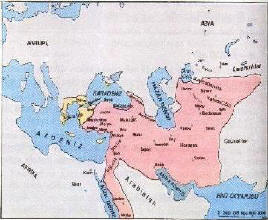 Widest borders of the Seljuks


The Seljuk Turkish history spanned the period from 1060 to around 1307. The Seljuks were a tribe of Tartars from Central Asia who established a powerful empire in Persia in the 11th century. They captured Baghdad in 1055. The Caliph of Baghdad was so impressed with their strength and skill that he made their leader, Tugrul Bey his deputy and conferred on him the title of "King of East and West". The Seljuks however assumed they were the rightful owners of all land conquered during the time of Prophet Mohammed and were keen to extend their kingdom. So a contingent of around 5000 moved into eastern Anatolia and left their mark there for some time.

The Seljuk Turkish history is significant in that they are regarded as the ancestors of the Western Turks - the modern Turks of today. The Seljuk Turks were the first people to invade Anatolia completely. With the establishment of the Anatolian Seljuk State as part of the Great Seljuk Empire began the Islamic period in Turkey. The Seljuks played a major role in the Middle Ages in defending the Islamic world against the Crusaders, and conquering large parts of the Byzantine Empire. They also did a service to Europe by providing a barrier between them and the raiding Mongols. Finally their importance lay in the fact that they paved the way for the Ottoman Turks.
History of Seljuk Turks  |  Beginning of the Seljuks  |  Contributions of Seljuks to Turkish History  |  Decline of the Seljuks