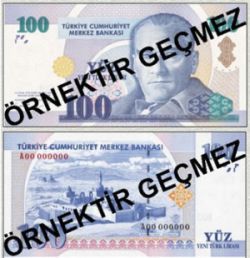 100 Lira is the biggest Turkish banknote


If you visited Turkey before 2005, you would have come across the country´s amazing money, with each lira note having more zeros than you could count. Paying for your evening meal with several million lira was an everyday occurrence! Well no more, because the Turkish government re-issued its currency in January 2005 and deleted all those pesky zeros! The New Turkish Lira (YTL or Yeni Turkish Lira) removed six zeros from the end of every note - so a one MILLION lira note became a one lira note, for instance. Four years later, the ´new´ has now been dropped and the Turkish Lira (TRY) is the Turkish Lira once more - just easier to handle! Money in Turkey is called the "para".